The fastest-growing food-supply sector in the world is aquaculture. Over the last decade, the cultivation of fish, shellfish and algae in controlled conditions has grown by 600% in terms of annual output. It’s highly likely that the Atlantic salmon, sea bass or prawns you eat at home have been raised on a fish farm, and that’s important for our planet: aquaculture is a critical pillar in the UN Food and Agriculture Organisation’s Blue Transformation strategy, which aims to enhance the role of aquatic foods in feeding the world in a climate- and environment-friendly way. 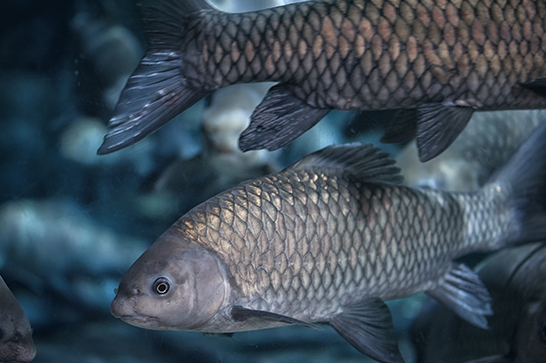 One fish that is particularly well suited to fish farming is tilapia. It inhabits fresh water, is fast-growing, and feeds on algae or any plant-based food. And it’s good for us – high in protein but low on fat, it’s also a good source of phosphorus, which is important for bone health. It has a mild taste and is relatively inexpensive. In the US, it’s the fourth most commonly consumed type of seafood.

Tilapia’s reputation has suffered somewhat as a result of dubious farming practices in certain parts of the world, but this is certainly not the case at the C.Vale co-operative in Brazil. Founded in 1963, the co-operative numbers more than 23,000 members, who produce a wide range of crops.

C.Vale’s tilapia are raised under optimum conditions by members of the co-operative using innovative and sustainable techniques before being delivered to the main processing and cold storage plant in Palotina in the state of Paraná, in the south of the country. From there they are exported around the world. The plant was built in 2016, with the intention of using the best technology the market could offer for air cooling and freezing the fish before they are exported. The major challenge was the sheer scale of the building, at 10,000 sq m.

“WE KNEW WE HAD THE SOLUTION FOR THIS CHALLENGE. BUT WE ALSO HAD TO DEMONSTRATE THAT CHOOSING GÜNTNER WOULD RESULT IN SIGNIFICANT ENERGY SAVINGS, AND THEREFORE A QUICKER RETURN ON INVESTMENT.”

The initial target for C.Vale was to process 75,000 tilapia a day. That was achieved immediately, and in the following six years production has increased, using the same processes, to 150,000 tilapia a day. The co-operative is also benefiting from the financial boost of major energy and water savings, says Ramos, while the 450 staff enjoy the comforts of air conditioning as part of the cooling solution.

“There are always challenges in our line of work, but that’s what motivates us,” Ramos adds. “We have the know-how and the technology to execute a project of this size with the certainty that we’ll get the best possible result for the customer.”

"WE ARE PROUD TO HAVE HAD SUCH A LONG RELATIONSHIP OVER THE PAST DECADE WITH GÜNTNER, WHO VALUE SUSTAINABILITY AS MUCH AS C.VALE. WE BELIEVE THAT PROJECTS THAT CONSERVE VALUABLE ENERGY AND WATER ARE THE WAY FORWARD FOR OUR INDUSTRY AND OUR PLANET. "