When it comes to energy efficiency, the Danes are among the world’s leaders. And one reason is the country’s long tradition of district heating, whereby both heating and hot water are provided to homes from a central plant. Nearly two thirds of Danish households benefit from this arrangement. 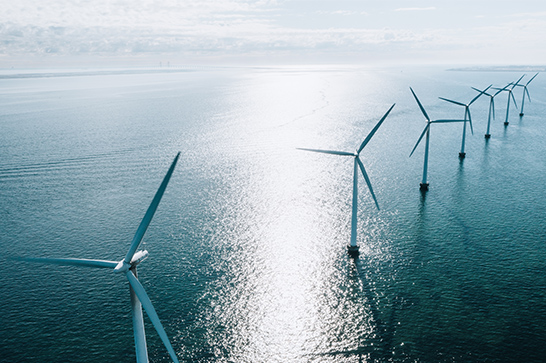 But there’s a problem. Around a third of the energy used to create district heating currently comes from fossil fuels. And much of the rest comes from burning biomass: a greener solution but one that still produces carbon dioxide in the atmosphere. Denmark takes its environmental responsibilities seriously and has pledged to make its energy and utilities sector nearly carbon neutral by 2030. But how will it do it? Part of the answer lies in one of the country’s richest natural resources: the wind.
The arrays of wind turbines that line Denmark’s shallow Baltic and North Sea shorelines are testament to the country’s wind power resources. On some days, when the wind is blowing hard, the whirling blades produce more electricity than the country needs, with the surplus exported to surrounding nations. This is the kind of clean energy that’s needed in a fossil-free world. And together with solar energy it can be used to power an increasingly popular form of district heating that depends on heat pumps.

“There’s a lot of focus on heat pumps in Denmark and people are very positive about them.”

Heat pumps powered by renewable electricity are far more efficient than those using the current combination of fossil fuels and biomass, and Güntner is helping to lead the way in this field. The heat exchange company recently took part in two heat pump projects in Denmark: one in the picturesque old port town of Faaborg on the island of Funen, and the other in the district of Smørum, north of Copenhagen.

Both projects aimed to cut down drastically on CO2 emissions. In Faaborg, for example, the target was to prevent six tons of emissions per year per user: the equivalent of four return flights from Europe to New York. And there was an added benefit for consumers: a forecast reduction in fuel bills of between 15 and 20 per cent thanks to savings on electricity and the reduced use of biogas in peak periods.

Heat pumps can draw on various sources, such as excess heat from factories, but both these projects called for air source heat pumps. In Faaborg, 32
Güntner Flat VARIO Condensers were installed, and 16 V-shape VARIO Dry Coolers in Smørum.

District heating plants are often situated on the outskirts of towns, but in Faaborg the plant was located in a partly residential area, meaning there were local planning restrictions on height and noise for the cooling system. This posed a challenge: how to keep to the rules without situating the cooling units so close to the ground that air would then recirculate through the system, making it less efficient?
The problem was resolved with the help of a CFD (computational flow dynamics) simulation, which could plot the flow of air around the cooling units under different conditions. “This was pioneering, because it’s not something you normally do in the refrigeration business,” says Henrik Andreassen, Güntner’s Area Sales Manager in the Nordic region. “It was the first time I’ve seen this technology used for a project in Denmark. It takes time to calculate and analyse the data – a single operating mode can take three days – but it gives a very good look into what you can expect.”

A combined total of 4,800 homes in Faaborg and Smørum now benefit from the two projects. And it’s hoped that in the future many more homes, both in Denmark and other countries around the world, will follow their lead.