Adélie penguins live in one of the most inhospitable places on the planet. The coast of Antarctica, which they call home, brings year-long freezing temperatures and long, dark winters. In autumn, as the sun begins to disappear, the penguins are forced to migrate north for thousands of kilometers across the newly formed sea ice to find food and to ensure they see at least a few hours of daylight.

So the humid, sunny, subtropical climate of Mexico’s Guadalajara Zoo offered something of a contrast, to say the least, when twelve Adélie penguins were brought there from a zoo in Japan in 2015. As Luis Soto, the zoo’s General Director recalls, in order for the penguins to feel completely at home, their specially built enclosure, ‘Antarctica: Kingdom of the Penguins’, needed to mimic as closely as possible their environment in the wild. 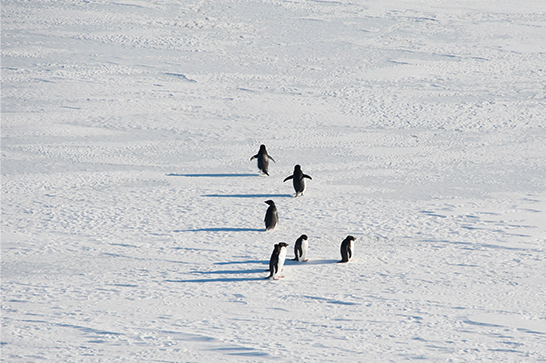 “We not only had to replicate the weather in terms of the temperature of the air and the water, but we also had to replicate their seasons,” he says. “In Mexico, when it’s summer, the penguins in the Antarctic are going through their winter, so we mimicked that, too, with the lighting in the enclosure. We have scientific data, so we know how long their days should last. That means in summer, when we have around 16 hours of light in Mexico, the penguins only get around six hours.”

Soto says there were several reasons why the Adélie penguins were chosen for the zoo. They’re very charismatic little creatures, for a start. The zoo also wanted to provide an opportunity for people in Mexico to see up close an animal species that otherwise most of them would never see in the wild. But there was a third, more important reason: although they are not endangered as a species, their natural habitat is very much under threat. Soto believes the zoo has an important role, as a kind of modern-day Noah’s Ark, in keeping selected animals safe and healthy with a view to an uncertain future. Getting the penguins to reproduce is an intrinsic part of this, although they are notoriously difficult animals to breed in captivity.
In order for that to happen, the penguins would need to truly feel they were in the Antarctic, which meant maintaining a constant temperature of between 0°C and -2°C in their living and sleeping areas, which included a pool and artificially created snow. This presented significant technical issues for refrigeration contractor Tecfrio and Güntner’s team.

“The space available for the cooling system was quite small, especially compared to commercial storage facilities,” says Omar Moreno, Güntner’s Sales Manager in Latin America. “As well as that, we needed to keep noise of the cooling system to a minimum, so the penguins weren’t disturbed, but at the same time we had to make sure we got sufficient air flow into the rooms. Then there was a further factor in that the salt water in the penguins’ pool was potentially very corrosive.” Güntner provided sealed stainless steel Cubic VARIO Air Coolers that were resistant to salt water while also being small enough to fit the required space. Low noise fans were used to make sure the penguins could live in peace and quiet. “It was very challenging to find the best customised cooling solution, but in the end we were successful in getting the exact requirements for the animals,” says Soto.

Three years later, in January, 2018, the zoo was able to make an exciting announcement: three Adélie penguin chicks had been born. It was the first time the species had reproduced in Latin America. Since then, a further eight Adélie penguins have been introduced to the world.

“It’s a real achievement,” says Soto. “It means we actually did a good job replicating the environment they need. The fact that we have these animals breeding means that we have given them the right conditions to live.”