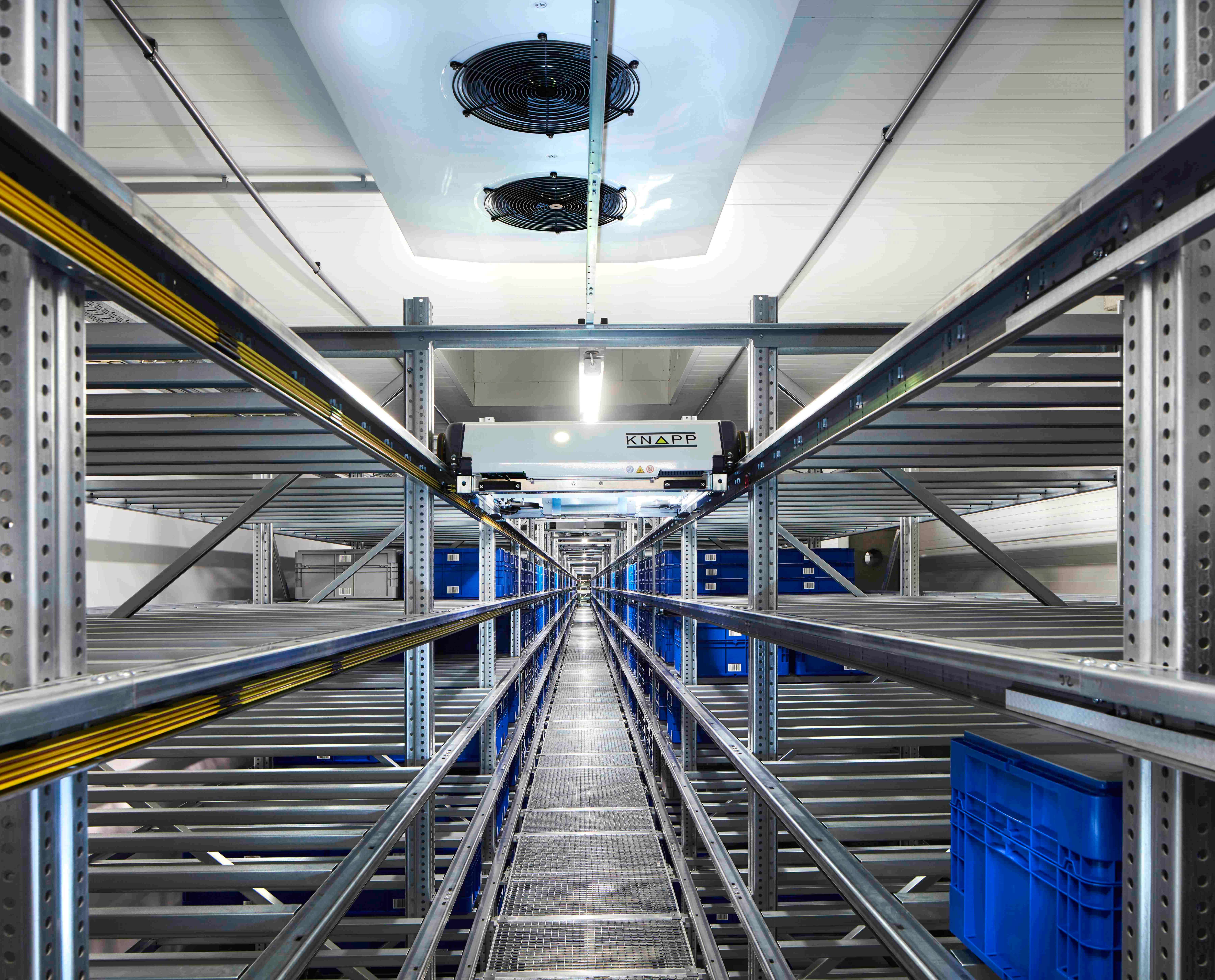 It goes without saying that hospitals and care homes need to offer their patients a high quality, balanced diet. But they also need to make the best possible use of the space that they possess. So it makes sense to outsource the preparation of meals, together with other non-core services.

In Germany, the ProServ company delivers supplies to healthcare institutions and uses cutting-edge technology to streamline the entire operation. At its ‘ProServ Campus’ in Pulheim on the outskirts of Cologne, up to 6,000 meals a day are prepared, and surgical instruments are sterilized for re-use in hospital operating rooms.
The company uses a state-of-the-art OSR Shuttle™ system developed by the automation specialist KNAPP, which picks up items and transports them to workers, sorts orders for delivery and automatically replenishes stocks. The system has been used since 2012 for pharmacy and medical items, and since 2018, when ProServ opened a new building with a central kitchen and central sterilization, it has also been used to store and sort meals, supplies and sterilized instruments.

In the catering section, ingredients for recipes arrive at a cook’s workstation on a conveyor belt. Once dishes are prepared, they then go back on the belt to be cooled and stored. When needed, they are retrieved by the shuttle and delivered to workers who prepare whole meals on trays, which are then packaged and stored in a precise order before being dispatched.


According to Udo Berger, ProServ's head of quality and project management, the OSR Shuttle™ system is both efficient and economical. “We can keep the processes lean and thus reduce costs,” he says. “In our original warehouse, we no longer have to work around the clock and we were able to greatly reduce the number of employees there within a very short time. The new technology there has paid for itself very quickly, and we’re hoping for the same for our second building, where we’ve combined the technology with cooling systems for the first time. "

But as Michael Freiherr, Güntner Managing Director, explains, the introduction of a cooling system presented challenges. “There’s not much space for cooling equipment and there’s an expensive robot in there, so you don’t want to have water droplets falling on it or on the food,” he says. “Normally that can happen if you do it wrong. It’s all about getting rid of the condensate.” Condensed moisture is usually removed via pipes on the ceiling, but the pipes themselves can attract moisture. Insulation solves that problem, but at the same time, the insulating material can harbour bacteria.
Refrigeration contractor Sachsen-Kälte came to Güntner with this conundrum and together they set out to find a solution. The answer was the development of a new product, the Güntner Dual COMPACT Air Cooler, which offers the option of an integrated condensation water pump that negates the need for pipes in the room. “The refrigeration unit can also be opened for cleaning and visual inspection, which is important because the processing rooms are cleaned regularly,” adds Freiherr.

“The unit can also be opened for cleaning and visual inspection, which is important because the processing rooms are cleaned regularly.”

Another challenge to be overcome was ensuring a constant temperature in the areas where food was stored and retrieved. “The passage where the shuttle operates is very long and narrow, but also very high,” says Freiherr. “You need to have the air circulating, so the temperature is constant everywhere in the room, to make sure the food is all chilled and there are no hot spots.”
The answer was to adapt Cubic VARIO Air Coolers with Güntner Streamers that direct the flow of air from the fan towards the wall. “The air then flips downwards, so you get much better distribution,” he says.
Today, the Dual COMPACT Air Cooler is a standard Güntner cooling system, but as Freiherr points out, it was only created because the company was willing to listen to a customer’s needs and work together to produce something new.