In most of the world, ice cubes tend to have a cloudy appearance, due to the air trapped inside them during freezing. But in Japan, the ice in your drink is likely to be crystal clear, thanks to a sophisticated manufacturing process that eliminates the air, making the ice harder and colder than a typical cube. Clear ice can be found packaged in supermarkets and convenience stores across the country and is commonly consumed at home with soda or whisky.

One company with a long and successful record of producing clear ice is Honda Reizo, located in the city of Himeji on the island of Honshu. A family business, it is run by Akiyoshi Honda, whose wife’s father originally founded the company in 1954. The company produces 113 tons of clear ice a day, made from water from a natural spring 100 meters underground. The ice, which has a slightly blue hue thanks to the minerals in the water, is sold in around 4,000 convenience stores in Osaka, Kansai area.

Honda Reizo’s customers demand ice of the highest quality, and so cleanliness on the production line is a major priority. For this reason, the factory is almost fully automated, limiting the number of workers. Having previously worked at a construction company and with a knowledge of production engineering, Honda designed the automated production line himself. Believing that a sense of humour is necessary in business, he also added a little whimsy to the technology by putting a penguin mask on the plant’s loading robot. It’s much appreciated by school students when they visit the factory for a tour.

“I RESPECT AND APPRECIATE ROBOTS AND MACHINES. THEY ARE CONTINUOUSLY WORKING FOR US EVEN WHEN I AM ASLEEP IN BED, AND I TAKE CARE OF THEM LIKE MY CHILDREN. SO I’M HAPPY TO INVEST IN THE MOST ADVANCED MACHINES.” 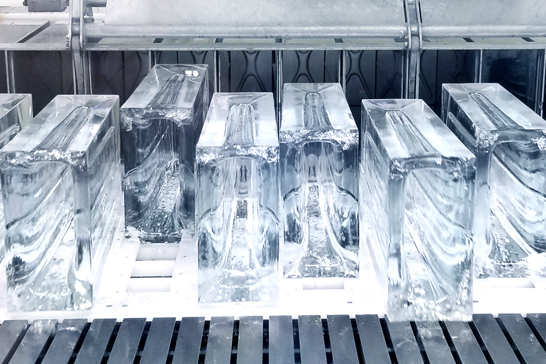 As part of his quest to use the best technology, a few years ago Honda decided to introduce a new refrigeration system for ice storage. He initially contacted Katsuhiko Harada, President of Nihon Netsugen Systems, a leading provider of made-to-order industrial refrigeration systems in Japan, who then introduced him to Patrik Raich, Japan Sales Manager at Güntner. Before deciding on his new cooling system, Honda made a fact-finding trip to Europe together with Harada and Raich, visiting Güntner’s factory in Tata, Hungary. While in Europe, he also visited various sites using CO2 cooling systems and became convinced that this was the way forward, as the natural refrigerant CO2 is greener and more efficient than other refrigerants.

In 2019, a total of 15 Güntner Cubic VARIO Air Coolers were installed in the cold storage area of the Honda Reizo plant, together with an external Flat VARIO Dry Cooler and 5 CO2 units from Nihon Netsugen Systems Co. Ltd.

“It was a privilege to work with Mr. Honda, he is full of energy and always smiling,” says Raich. “Not only does he run a very successful company using cutting-edge technology, but he’s also very committed to helping his local community and educating young people about his business in a fun way. It’s a lesson for all of us.”

“MR HONDA IS VERY SATISFIED WITH THE GÜNTNER COOLERS’ PERFORMANCE. THEY’VE BECOME INTEGRAL PARTS OF HIS ICE FACTORY. AND NOW HE HAS BEGUN HIS NEXT CHALLENGE, WHICH IS TO DOUBLE OR EVEN TRIPLE THE SIZE OF THE FACTORY BY 2024. AND OF COURSE, HE WILL CHOOSE GÜNTNER COOLING SYSTEMS AGAIN.”