Indonesia’s PT Bio Farma is a company with a long history of fighting disease and it’s now playing a key role in the fight against Covid-19 in the world’s fourth most populous country.
Originally founded in 1890 by the Dutch East Indies administration as a national centre for the development of vaccines, it grew steadily over the decades and by the turn of the century had established itself as a major player in the global vaccine market. Today, the state-owned enterprise is the largest vaccine producer in Southeast Asia, with an annual production of 3.2 billion doses, and its products are used in more than 140 countries worldwide. Its portfolio includes vaccines against viral diseases such as measles, polio and hepatitis B, as well as bacterial diseases such as diphtheria, tetanus and whooping cough. It also produces serums for the treatment of snake bites, tetanus and diphtheria. 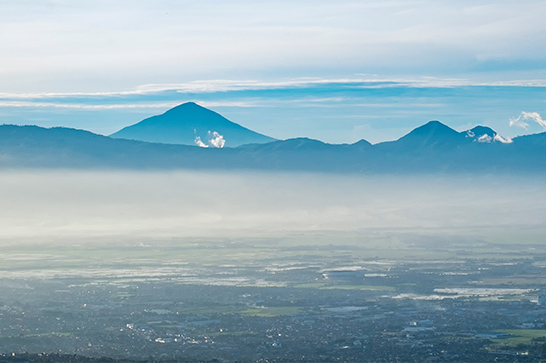 In 2018, the company began construction of a new, six-storey building to expand its production and storage capacity. “It was a big project, because they were building a new plant,” says David Widjanarko, Güntner Indonesia National Sales Manager. “It’s not that common for pharmaceutical companies to build a whole new production facility, they usually just add extra capacity to existing buildings. But this was huge.”

The company is based in Bandung, West Java, where the daytime temperature regularly reaches the mid-twenties Celsius. That meant cooling would play a vital role in the construction of the new facility.
“These are very delicate and sensitive products,” says Mr Rahardja Yangky, owner of DLM Resto Services, the refrigeration system installer. “Cooling is crucial to the whole process, from the temperature of raw materials to the temperature of the production area, and then the final cold storage room. And certain products need to be kept in a controlled atmosphere in terms of both temperature and humidity levels.”

PT Bio Farma officials visited the Güntner facilities in Pasuruan, East Java for a detailed explanation of its coolings solutions and to be reassured of their high quality and certification. Güntner supplied a total of 46 Cubic VARIO Air Cooler units for controlling temperature in the production and cold storage areas of the new building, plus four fully customised Cubic VARIO Air Coolers with humidity control capabilities.

At the time, nobody could have realised just how critical the building would be for the health of Indonesia’s population. In early 2020, as the coronavirus pandemic began to spread across the world, creating and storing Covid-19 vaccines became a major priority for PT Bio Farma. Their role in the crisis was given the official stamp of approval in August of that year, when Indonesian President Joko Widodo paid a visit to the new facility, where scientists were hard at work developing a new vaccine. Importantly, the building allowed the company to have its laboratory in the same place as its production and storage facilities.
In January 2021, President Widodo became the first person in Indonesia to receive a Covid jab in an ambitious program to vaccinate 181 million members of the Indonesian population. And by March, the new building had become the main Covid vaccine storage facility in the country, with a total of more than 49 million doses of the Chinese Sinovac Biotech vaccine and the UK’s AstraZeneca vaccine stored under its roof and maintained at optimum temperature.

In the future, PT Bio Farma will begin producing its own vaccine, with a target of 250 million doses a year. The company’s contribution to combating the virus is difficult to understate. As Indonesian Health Minister Budi Gunadi Sadikin puts it, “The vaccines are the instrument that will protect not only ourselves but also our family, our neighbours, the Indonesian people and human civilisation.”

“The vaccines are the instrument that will protect not only ourselves but also our family, our neighbours, the Indonesian people and human civilisation.”