The world seemingly has an insatiable appetite for tomatoes. Currently more than 180 million tons are produced globally each year to satisfy the demand for fresh tomatoes, canned tomatoes and tomato paste. And these shiny red fruits are good for us: tomatoes are low in calories and rich in vitamin C, potassium, folate and vitamin K – and even contain a powerful antioxidant called lycopene, which has been linked to various health benefits, including a reduced risk of heart disease. Tomato production has grown by more than 400 percent in the last 50 years. In order to meet demand, plants are often grown year-round in greenhouses that are heated in the winter months. However, heating requires energy, presenting a dilemma for producers in a world where consumers increasingly value sustainability.

In Italy, the FRI-EL Group, a leading producer of clean energy, found an ingenious solution to this problem when it was looking for a use for the waste heat that is a byproduct of creating electricity from biogas. In Ostellato, about 50km northeast of Bologna, it built hi-tech greenhouses next to its power station, and these are heated by hot water produced by the plant. The H2Orto project, as it’s known, allows it to produce a range of tomato varieties 365 days a year, which are sold throughout Italy and in other countries in Europe.

Sustainability is key to the project. The tomatoes are grown hydroponically in giant, hi-tech greenhouses, a method that uses considerably less land and water than traditional grown crops. And the greenhouses are equipped with a sophisticated irrigation system, with excess water recovered, filtered and fed back, while rainwater is also collected and used. The biogas plant uses agricultural by-products that are eventually turned into fertilizers. 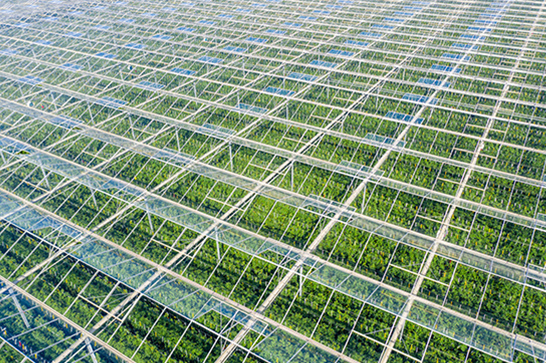 As commercial director Alessio Orlandi puts it, “We save 70 percent of surface area and 70 percent of water and use a production model that exploits our circular economy: we recover precious energy and at the same time we give life to a virtuous cycle that is good for the environment and our tomatoes.”

The project began in 2015 with an area of just 1.5 hectares, but since then it has expanded considerably, with more greenhouses added. This year, the total area will reach more than 31 hectares – the equivalent of 40 football fields. With this growth has come the need to build a new processing and cold storage facility, in which Güntner was able to play a key role, thanks to its energy-efficient cooling technology. The facility is divided into three areas: one where the tomatoes are blast-chilled – allowing to maintain all of the tomatoes’ nutritional value –, and two others where they are processed and dispatched and need to be kept cool.

Typically, nothing is wasted. “The cold water produced by the chillers is also used to generate cool air in other areas of the production plant such as the changing rooms and the offices,” says Orlandi. “That means the cooling in these areas can also benefit from the energy saving and reliability of the Güntner Air Coolers we’ve installed.”

The cooling and blast-chilling system uses fourteen of the latest evolution of Güntner's air cooling units, the Cubic VARIO Air Coolers equipped with energy efficient EC fans and a post-heating system – essential for controlling the correct level of humidity for the tomatoes –, with a total cooling capacity of one megawatt.

"It’s great that they chose Güntner, not only for our Air Coolers but also for the technical support provided in the development phase of the project by our team,” says Stefano Vidal, Güntner Sales Manager in Italy. “What FRI-El Group is doing aligns with our vision of creating a better future. Our cooling solutions are the most reliable and energy-efficient ones in the market, which was a key factor for choosing our Güntner Air Coolers."

The H2Orto tomatoes have been given sustainability certification by Friends of the Earth – an international certification for sustainable agriculture and livestock – adding to their appeal among the general public, who increasingly value sustainable products. “We are very proud to be part of this project and to help solve the challenges of tomorrow,” says Vidal.

“We are very proud to be part of this project and to help solve the challenges of tomorrow.”